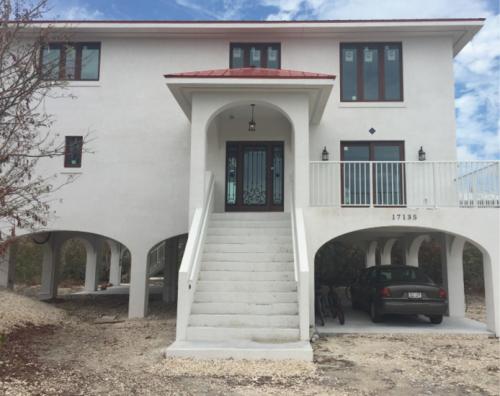 Above: All building products on this new construction home on Sugarloaf Key are certified with Miami-Dade Notices of Acceptance and tested for multiple large missile impacts to both the glass and framing members. No structural or water damage reported at the home following Irma. Below: Debris lines a heavily damaged street on Little Torch Key. (All images courtesy of the author.) 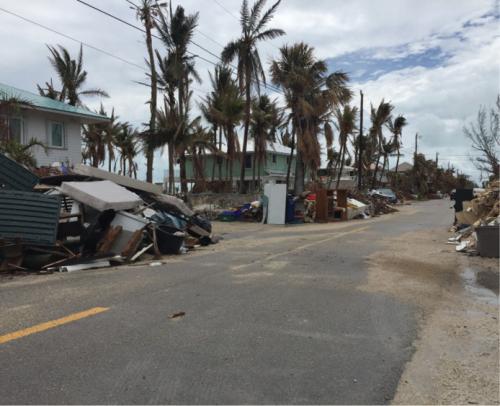 Editor’s Note: This article is based on a presentation Dean Ruark delivered at the American Architectural Manufacturers Association 2017 Fall Conference in Greenville, South Carolina. For more information, visit aamanet.org. Ruark also wrote a blog about his experience, available at aamanet.org/blog.

Hurricane Irma made landfall in Florida on Sept. 10, 2017. It hit the Florida Keys as a Category 4 hurricane with 130 miles per hour winds before moving slowly up the Florida peninsula as it weakened in intensity. Loss estimates for the storm range from $25 billion to $65 billion, according to a November 2017 article in the Insurance Journal.

Last fall, I joined engineers Lynn Miller, Robert Beaird and Erin Koss from PGT Innovations to assess structural damage caused by Hurricane Irma with a focus on windows and doors. We toured heavily impacted areas in the Florida Keys on two occasions, as part of a study led by the University of Florida, to examine the impact of Irma on buildings and infrastructure throughout the state and visited the area a third time with FEMA for additional analysis.

We are able to bring these findings and our data into conversations about codes and standards and into our development of even better performing products for our industry. This is the first of two articles that offer key findings from our assessments.

We have come a long way since Hurricane Andrew. When Andrew hit in 1992, there was a lack of solid building code in Florida. The code wasn’t strong enough, there was little enforcement of the code that was present, and there was an absence of resources for disaster recovery following a storm. Following Andrew, Dade and Broward County developed and adopted the most stringent and enforced code in the country.

Irma was a devastating storm, and we can’t minimize the amount of damage. However, we could clearly see that the newer housing stock did far better than homes built before Andrew. Additionally, the communication and outreach before, during and immediately after the storm were solid. There were massive resources available for people who did lose their homes. They had shelter, food, and insurance representatives lined up and ready to help.

In part two of this article, we’ll take a look some of the harder lessons from the storm, including ASTM test standards and water intrusion. Read about it in the May issue.

Hurricane Maria, one of the strongest and most destructive Atlantic storms on record, made landfall in Puerto Rico on Sept. 20, 2017, as a high-end Category 4 hurricane. The storm, with 155 mile-per-hour winds and a 9-foot storm surge, destroyed hundreds of thousands of structures and sent the island into extended blackout—as of press time, more than 400,000 of customers still don’t have power, according to a Feb. 12 article from USA Today.

The extent and severity of the storm damage has caused many to take a closer look at the island’s building codes. “Weak Building Code Enforcement Exacerbates Destruction in Puerto Rico,” read a December Wall Street Journal headline. “Building Codes on Puerto Rico Unable to Withstand Category 5 Storms,” read another, from ABC News. The findings of most experts and government officials in the articles say the issue isn’t the building codes themselves, but a problem of uneven enforcement and widespread informal construction.

In 2011, Puerto Rico adopted the 2009 International Building Code. The 2009 I-codes require that coastal areas in hurricane zones be able to stand up to 140 mile-per-hour winds. Additionally, the code calls for hurricane-resistant building materials, such as shutters or impact-resistant glazing, in those most at-risk areas. “When it comes to wind worthiness, these building codes are similar to the ones that govern mainland U.S. cities like Miami,” said an engineer at the Insurance Institute of Business & Home Safety in the ABC News article.

New construction in areas with code enforcement fared well during Maria, experiencing only minor damage, according to officials in the Miami Herald article. The informal construction, however, was often destroyed.

The lack of enforcement and oversight “is not unusual and somewhat reflective of code enforcement in the United States back in the 50s,” says Tom Thompson, director of building and safety for the Colorado Division of Sunrise Engineering Inc. “Some local jurisdictions are very proactive and want professional code enforcement, and some do not place near the importance on same. Even today in some remote Colorado counties and cities, local legislative bodies may choose to adopt codes and issue permits (for revenue purposes) but do not adequately fund and staff competent inspectors.”

Dean Ruark is vice president, engineering and product management for PGT Innovations and president of the Southeastern Region of the American Architectural Manufacturers Association.