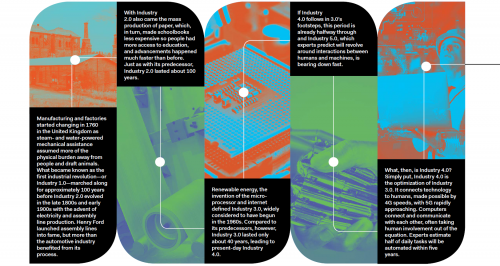 As technology infiltrates more areas of life, data breaches rise. Nearly 9,000 reported data breaches occurred between January 2005 and April 18, 2018, according to the Identity Theft Resource Center. IoT attacks rose by 600 percent in 2017, according to Symantec, and 31 percent of organizations have had cyberattacks on their operational infrastructure, according to Cisco Systems. Data protection is a serious matter.

FeneTech uses what Miller calls “standard internet security protocols” where each user has a login for their company information. On a more granular level, users’ access to information may differ within the same company based on what they need to access for their specific role.

GED’s McGlinchy says the company uses data encryption to keep security intact and ensure “the data is being controlled at the plant level.” Information from GED’s machinery also can be shared with the customer’s ERP system and data protected at that level as well. To date, however, McGlinchy isn’t aware of any data breaches or concerns.

Ready or not, automation is the future of manufacturing. Companies today have no choice but to embrace Industry 4.0 in their manufacturing practices or run the risk of being left behind, according to leading industry machinery and equipment suppliers.

Industry 4.0 is a broad and, at times, daunting term. At its most basic level, Industry 4.0 is computers connecting and communicating with each other, often taking human involvement out of the equation. Experts estimate half of daily tasks will be automated within five years.

At an extreme, this causes some to fear that automation will “steal jobs.” However, the reality is just the opposite. “The fenestration industry is trying to solve its labor issues by getting more laborers in a market with no workers; trying to hire people that don’t exist,” says Mitch Lewandowski, vice president of sales for Soft Tech. “Technology is a solution for labor challenges. It automates tasks and keeps younger workers engaged.”

Automation also allows companies to increase production efficiencies. John Ryba, technical services manager of Quanex, recalls that when he first worked with automated welders and cleaners 18 years ago, they helped people get work done in eight to 10 hours that previously had taken 12 to 14 hours.

“Companies can’t get enough employees,” says Ryba. “As their business grows, they struggle to make the units. They’re trying to add shifts and keep up with capacity and can’t do it.” This is where automation comes in.

Automated machinery never tires, he says. As shifts near their end and, especially in extreme weather conditions, humans are more liable to tire, and quality often decreases while risk of injury increases, especially while maneuvering increasingly heavy units that necessitate two people to be in sync to do so safely.

“With high turnover at our customers’ locations, they’re looking for sustaining automation and being able to reproduce the job and maintain quality,” says Tim McGlinchy, vice president of engineering/research and development at GED Integrated Solutions. This pressure to deliver high-quality products while keeping price and cost down contributes to automation being an integral part of any manufacturing process.

Twenty years ago, the only way to discover an order status was to walk around the shop floor and ask people if they knew where it was. “A lot of systems were very antiquated and that’s one of the reasons we got into the industry is that a lot of systems were disconnected,” says Dave Miller, group manager – applications engineering at FeneTech. Barcode scanning and tracking eventually led to machines automatically updating the status of units as they passed through an assembly line.

In advanced manufacturing, an enterprise resource planning, or ERP, system collects and houses data, including visibility of all assets on the shop floor, their capabilities and how they currently operate. It also evaluates in real time how new orders impact live production.

“You want to know what is planned for production, which is a direct result of the ERP system planning out what’s expected to be produced today based on order due dates,” says Miller. “As units are being completed you want to know if you have the opportunity to hit your targets before the shift is over.”

As long as information about current orders is in the ERP system, he explains, it can calculate if a target ship date is feasible and, if not, what part of the process could cause a delay. At that point, says Miller, the information goes to a customer service team where a supervisor might opt to squeeze the order in to meet a target ship date or talk to the customer to adjust the expectation from the beginning.

If Industry 4.0 follows in 3.0’s footsteps, this era of manufacturing is already halfway complete, and Industry 5.0 is bearing down fast. Industry experts anticipate the next era of Industry will revolve around interactions between humans and machines.

Advanced though factories are today, “we’re just touching the tip of the iceberg,” says Quanex’s Ryba. He predicts one day robots will load glass onto a glass cutting table, which then will be glazed into the finished product, before a robot unloads it. “Years ago, the issue was getting the machine to talk to our programs, but all that’s been taken care of,” he says. “There’s so much data in there that is untouched right now. The next step is nobody will touch the product.”

For Chris Kammer, marketing coordinator for A+W Software, future automation means “moving toward [full automation], but humans will always be needed to make certain critical decisions,” he says. “Humans provide logic and reasoning because certain things aren’t programmable to an algorithm. Algorithms can run most things; however, there still needs to be some amount of reasoning, logic and empathy at times.”

Although industry experts vary in the exact details about the future of manufacturing, one thing is certain: automation and integration are here to stay. Companies that haven’t yet made the transition to making their factory floors fluent with Industry 4.0 should get on board before they get left behind.