High-speed machinery can allow product to move through a facility in an expedited manner, but companies need to consider more than speed before investing in this equipment 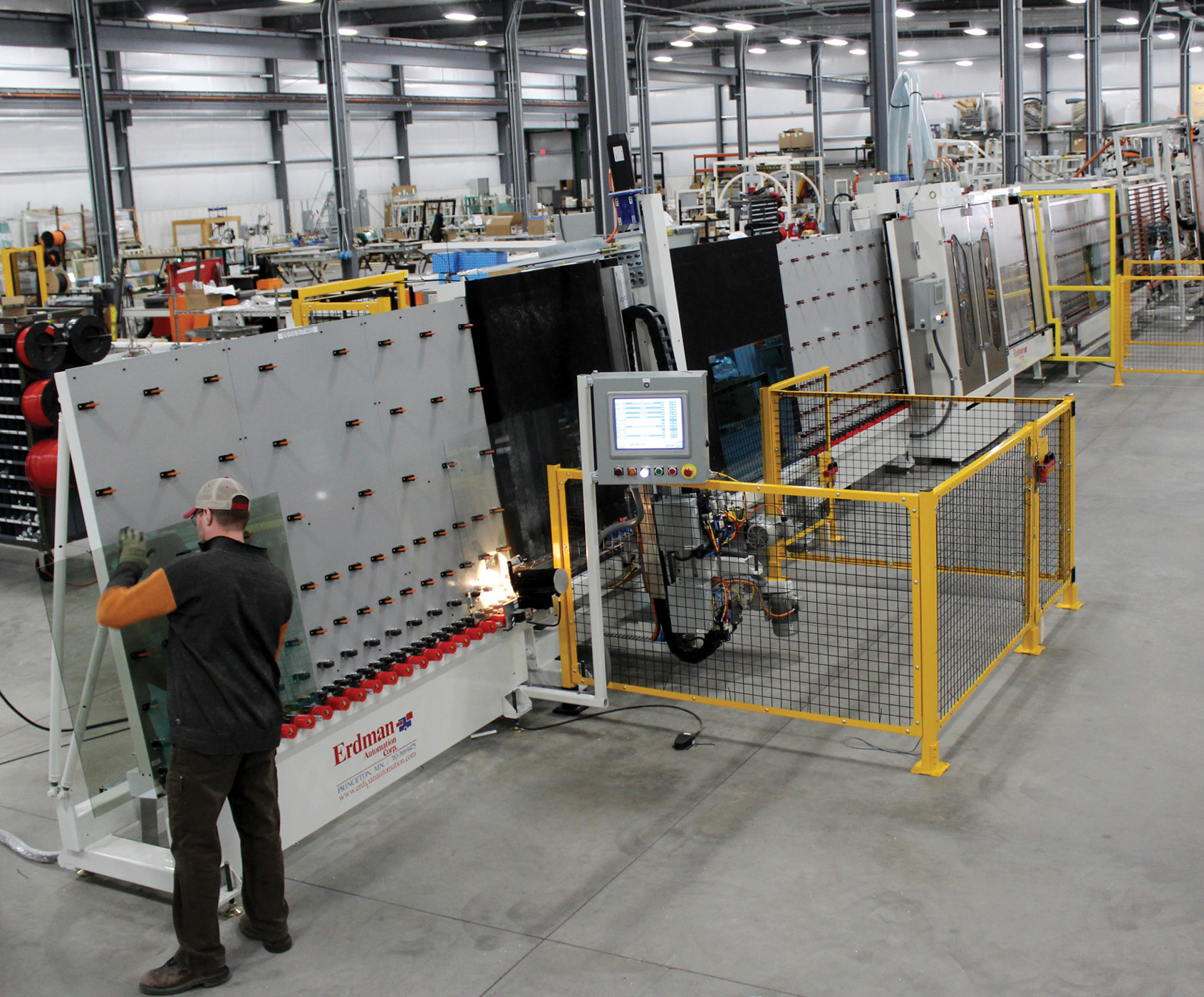 Above: The Erdman High Speed Parallel Process Dura Spacer IG Line is a vertical line that requires three to four operators, rather than the seven to nine operators a traditional line may require. Photo courtesy of Erdman Automation

As window and door manufacturers seek to increase production, some are looking at high-speed machinery as a potential solution. Although high-speed machinery doesn’t have an official definition, Morgan Donohue, vice president of sales and marketing, Erdman Automation, says he defines it as machinery that is faster than traditional machinery.

When Erdman developed its first high-speed line, he explains, the company described it as high-speed because it was a line that used the same number of people in a similar footprint but could produce a unit in about half the time. A traditional line could run about 35 seconds, whereas the high-speed line is between 17 and 20 seconds, explains Donohue.

“High-speed automation can also be about efficiency, or the ability to recover quickly,” says Tim McGlinchy, executive vice president of engineering and R&D, GED Integrated Solutions. “How do you recover from chaos? For example, we have software features that allow a single component to be re-made, or the entire window.” That functionality, he explains, saves time, which is of particular importance when an entire order is waiting for shipment based on the completion of one piece.

The idea of running a unit through machinery in half the time is appealing, but speed is only part of a complex equation companies need to consider.

When to consider high-speed equipment

Donohue says high-speed might mean different things for different manufacturing categories. But it all comes down to if it makes sense to have high-speed for a particular customer.

For example, a machine that has a one-minute process will produce 420 units in a normal shift (assuming one normal shift equals 420 minutes). “If someone needs 420 units or less in a shift, then that process would be sufficient,” says Donohue.

If, however, a company needs more, it might consider investing in a high-speed unit that could produce one unit every 30 seconds for 840 units in a shift using the same amount of people. “But if you don’t need 800, why would you buy a line that’s capable of that?” questions Donohue. “It’s a system of understanding what the throughput is, what the capabilities are for a space and people and if it makes sense.

“There’s certainly an attractiveness to the ability to do more in the same footprint with the same number of people, even if you don’t need all of the throughput,” he continues.

“Maybe you only need 30 or 50 percent more, but rather than put on another shift or buy another complete line, you decide to invest in high-speed.” Again, it’s up to an individual company to determine whether the investment is worth it for what benefits they hope to achieve.

McGlinchy says many of its customers target making one window per minute, though anywhere from 45 to 90 seconds seems like the “sweet spot.” “That means a frame, two sashes for a double-hung, then assembly with hardware and balancers,” he says.

Yet another consideration is seasonality, says McGlinchy. “Right now, everyone is busy all the time, but that wasn’t always the case,” he says. “Do you want a plan for your peak capacity, or for average capacity throughout the year?” Many window and door manufacturers prefer to go into overtime mode during peak capacity rather than over-automate, he explains.

However, sometimes that extra capacity and ability to accelerate is of value to a manufacturer. “If they run fast, then they don’t need two shifts,” he says, which means fewer people to train and more time to maintain equipment.

Priorities shift over time, though. “What’s important today wasn’t important five years ago,” says McGlinchy. “The difference between then and today is supply chains have caused a lot of reactionary production. When companies have the materials, they want to make things. Plus, demand is higher than it was two years ago.”

Companies that invest in automated machinery, whether or not it’s high-speed, need to consider the payback for the benefits that machinery can bring to the factory, whether it be through speed, labor, efficiency or a combination of all of those. “The rule of thumb for ROI used to be two years or less,” McGlinchy says, but notes that some customers now are okay with longer paybacks than that. “People didn’t want to invest if they couldn’t get the quick payback; they wanted instant success. But it’s really the long-term success that’s important.”

The ability to get and retain good-quality labor is another factor to consider with high-speed, says Larry Johnson, VP of sales, Quanex Building Products. Johnson references the need for less labor as a benefit of high-speed. He typically sees a reduction of about five to six workers per high-speed line to get the same type of output as a traditional line. He says a high-speed line typically requires two workers: one to load the glass and one to unload the glass. A third worker may be required for muntins. Semi-automatic horizontal lines, on the other hand, may require seven to nine people, he says.

Johnson also says the transition to a high-speed line takes a mental shift. “Automated equipment eats so much of the raw material so much faster that the process sometimes can be different. Typically, a high-speed automated line everything flows through one way versus when it’s manual, it flows to different stations. It takes a little bit different of a mindset.”

As with any new investment, companies must be aware of several potential pitfalls when investing in high-speed machinery.

If the process isn’t managed correctly, factories might find themselves with product buildup at one point or another in the manufacturing process. Donohue frequently sees companies eliminate one bottleneck but create another one. “There will always be inadequacies between different processes that you can solve through labor, more automation or larger footprints,” he says.

Solution: Donohue says companies must understand their upstream and downstream capabilities to determine if they can fully utilize a piece of high-speed machinery. Each company needs to look at its individual processes to determine capabilities at each step. “It’s a decision point where if you need to go faster, how do you want to go faster,” he says. This can be through high-speed machinery, but it can also be through adding another line, which of course requires a larger footprint and more labor to operate the machinery.

“Ideally, the vinyl and IG lines will run at the same speed and put them together out the door,” says John Moore, vice president, marketing, GED Integrated Solutions. “It’s balancing that process.” Software can also help organize the proper flow of materials and will help have the proper components prepared and joining at the appropriate time.

There’s always a learning curve with new machinery, whether it’s high-speed or not, says Donohue. “The higher the expectation, the faster the difference, the more of a learning curve there tends to be,” he says. The faster machinery requires not only proficiency from the operators, but also from the maintenance perspective.

Solution: Looking at it from a production standpoint, maintenance likely drops, says Donohue. The lines Erdman builds for high-speed are built to have a high-duty cycle and run quickly. “You’re producing more before you have to maintain it, but there’s more of it, so therefore there’s more maintenance required in terms of volume because you’re producing more volume,” he explains. Donohue has conversations with customers about what they could be spending on maintenance, how frequently and what skill sets maintenance staff should have.

McGlinchy also notes operator positions typically have a high turnover, so using a simple, intuitive human machine interface can help expedite operator training, especially if a factory employs multiple machines from the same manufacturer, many of which use similar layouts. “If it all looks the same and feels the same, it’s more comfortable,” he explains.

Donohue cautions about being aware of when a company might reach the point of diminishing returns. This could happen, for example, if there is value-added work to the manufacturing process such as adding grids, which would require more people. There are also scenarios in which more people are required to load and unload the glass. All of these can rapidly add up necessary labor. In such cases, Donohue says some companies may be better off going with two lines rather than heavily staffing one high-speed line.

Johnson recommends companies considering high-speed line invest time in researching and picking the machinery supplier that best meets their needs in the price range they want. “Be careful and do your homework about who you’re partnering with,” he recommends. “Make sure they have a good service record. Go visit plants that have the machinery if you can. It’s a huge investment, and a good investment, but you need to do your homework on it.”

In praise of high speed

Quanex installed 11 high-speed vinyl lines in its Kent, Washington, facility and is looking at installing more in the “near future,” says Johnson. The company also has several extrusion lines on the IG side of business that extrude for foam spacer and run products for the Dura line. “Typically, one person runs two lines on the Dura side and two people run one line on the Super Spacer side,” explains Johnson.

The 11 lines in the Kent facility eliminated 26 other lines, some of which were older. “We were able to get the same output on 11 lines that we got on the 26 before,” says Johnson. He also says the old lines required more experienced workers, but the new, more automated lines are user-friendly for newer employees. “The kids walking in the door seem to embrace the lines a lot faster than the older people because it’s more like a video game,” he says. “You walk up and hit the numbers and the machine does its job, whereas the older lines had a lot of dials and gauges to operate. That’s what’s really nice about it; it doesn’t take weeks and months of training like the older lines do.”

High-speed lines in Quanex’s screens facilities not only have reduced labor, but have improved worker health and safety by eliminating repetitive motions, which helps prevent afflictions like carpal tunnel syndrome. “It’s more precise, less labor-intensive and less stress on a person’s body rolling screen frame. The quality is much higher,” says Johnson.

Speed can be a reason to move to automation, but McGlinchy says automation is also a way to organize production volume to get out the door, optimize materials and sort processes, which could include batching materials like glass or vinyl. “At the end of the day, they’re trying to produce for the lowest dollar,” he explains. “Today it’s about materials savings. We never had this complication of getting materials, so manufacturers really need to utilize materials to the best degree because they may not be able to get enough material.

“Automation,” McGlinchy explains, “has to solve the business issues. You don’t just automate for the sake of automation.”

Donohue expects more improvements to come to fruition in the coming years. “Necessity is the mother of invention,” he quotes. In other words, “You invent things because you need them. Sometimes people don’t know that they have a need until you invent it. As more machine suppliers see our customers’ needs, invention and innovation will happen in many more areas of the plant simply because of necessity.”